SAMe (S-adenosyl-methionine) is a natural metabolite of the amino acid methionine. SAMe is a “methyl-donor”, meaning it is a co-factor in a number of critical biochemical reactions in the body including the manufacture of important brain compounds like neurotransmitters.

SAMe supplements are available as tablets and capsules.

For pets (and humans), SAMe is used to treat for anxiety disorders and depression.

SAMe might also have pain reduction properties. A 2004 study compared the effectiveness of SAMe to the Nsaid drug celecoxib for pain control in people with osteoarthritis of the knee. The study concluded, "SAMe has a slower onset of action but is as effective as celecoxib in the management of symptoms of knee osteoarthritis." 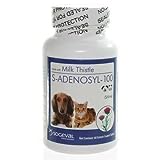