Treatment Type: Natural health products
Caregiver: Do it Yourself

Loose salt added to feed is a popular way of providing horses and livestock with extra salt.

Himalayan salt is mined from ancient salt beds in the Punjab area of Pakistan. Like table salt, Himalayan salt is primarily composed of sodium chloride, though it also contains trace minerals such as iron, zinc, lead and chromium, which give it it's pink coloring.

Himalayan salt for horses and livestock is typically sold in blocks or rock licks on a rope, though it is also available as loose, course salt.

Sodium is important for hydration. A large horse requires approximately 28 grams (2 US tablespoons) of sodium chloride a day. Other animals such as goats, pigs etc.. have varying mineral requirements depending on their age, size and stage of production.

Salt products are typically available either with, or without, iodine. Iodized salt contains iodine. Iodine deficiencies can lead to an enlargement of the thyroid gland (goiter), a condition which is most often found in young animals.

Messy and hard to get into them

Loose salt is exactly what it sounds like, salt in a loose, granule form. You really have only two options in terms of administering it... 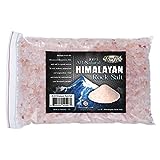