Treatment Type: Natural health products
Caregiver: Do it Yourself

Pink salt blocks and licks are popular ways of providing horses and livestock with extra salt. Pink salt is mined from ancient salt beds. Like table salt, pink salt is primarily composed of sodium chloride, though it also contains trace minerals such as iron, zinc, lead and chromium.

The two types of pink salt which are most commonly used for animals are Himalayan salt, which comes the Punjab area of Pakistan, and Redmond sea salt, which is mined in Utah, United States. Both are available in compressed blocks, and as unprocessed rocks on ropes.

Sodium is important for hydration. A large horse requires approximately 28 grams (2 US tablespoons) of sodium chloride a day. Other animals such as goats, pigs etc.. have varying mineral requirements depending on their age, size and stage of production.

Salt products are typically available either with, or without, iodine. Iodized salt contains iodine. Iodine deficiencies can lead to an enlargement of the thyroid gland (goiter), a condition which is most often found in young animals.

My goat always had access to a salt block. They're pretty important for their overall health. They're easy to give to your goat and luc...

Himalayan Salt Blocks and Licks for Vitamins and Supplements

We used salt blocks and salt licks for our goats. We didn't use the kind with iodine in it very often. Goats do need some iodine, but t...

Himalayan Salt Blocks and Licks for Vitamins and Supplements

Natural Salt that is easy to use

I like that this is a natural product . I also prefer the blocks versus the loose because I have less waste. They do not crumble or bre...

Himalayan Salt Blocks and Licks for Kid Health and Wellness 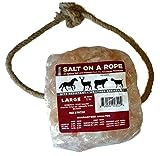