Quick to learn and train

Clifford was born and bred at a show dog kennel, where my mother and I were both employed. The owner, in a true faux pox of the breed, bred together two pure white bullies. That, of course, resulted in a litter filled with deformities and health problems. Of them all, Clifford was the surface-best. He had a cleft pallet but no other physical deformities. The kennel owner kept him for a year before deciding that he needed to be put down.

He came home with us, instead.

We had Clifford for six years, and I know that I will never have another dog like him. Bullies are naturally energetic, with a kind heart and a spirit meant to please others. He loved attention, eating freshly peeled oranges and, more than anything else, everything fuzzy and small. Baby rats, orphaned kittens, sick goats - if it came in the house, then he considered it his baby. He would sooner lick something to death than hurt it.

Near the end, he started losing his vision and, if something startled him, would grow aggressive. This, we later learned, was due to a tumor in his brain - we ended up having to put him down because of it.

The thing to remember is that these guys are known for having a lot of energy. While loving, they have a ridiculously high pain threshold and no care for their surroundings. Clifford wasn't destructive by nature, but many a glass was broken when he went racing through the house and slammed into the leg of the table.

He was a good dog, and he loved everything and everyone that set foot in our home. 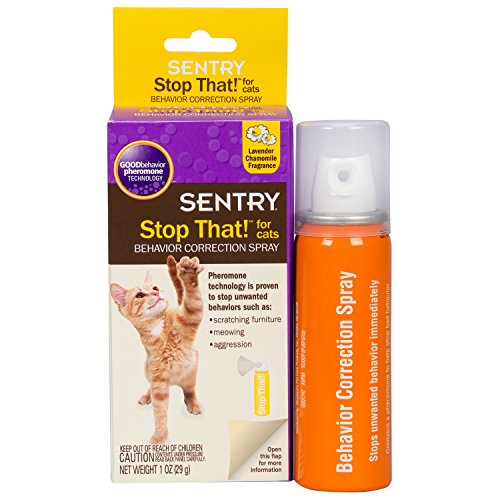 SENTRY Stop That! For Cats, 1 oz

It helped remove Clifford's "fish stink" which most other products couldn't do.