Is the Jack Russell Terrier right for you?

The basics:
The Jack Russell Terrier is a bouncy, high-energy breed developed during the 19th century to work with human hunters and be relentless in its pursuit of game-- often foxes that had to be dug out of their dens. As a result, this breed is high-energy, needs a great deal of exercise, expects to spend hours roaming the countryside with its people, and loves to dig.

For the active person seeking an outdoor companion, the Jack Russell can be the perfect choice. For the busy person with a tiny or nonexistent property, this breed can be the worst possible choice. It's also unwise to add this dog to a family that already owns several smaller pets which may look like potential hunting game to the JRT. Evaluate your own circumstances carefully before you fall in love with a puppy you can't handle.

Appearance / health:
The JRT has a short-legged, muscular, sturdy body with a length proportional to its height; color is principally white, with patches of brown and black, frequently covering part of the face. The head should be nicely balanced, proportionate to the body; the skull is flat; moderate width at the ears and narrowing to the eyes; the stop should be defined but not over-pronounced; muzzle length from the nose to the stop is to be slightly shorter than from the stop to the occiput; the nose is black. The jaw is powerful, well-boned and the cheeks strongly muscled. Eyes are dark, almond-shaped, and intelligent; ears are dropped, small "V" shaped carried forward and close to the head; the mouth has strong teeth with the top slightly overlapping the bottom; both level and scissor bites are acceptable, though scissor is preferred. The tail is set high, typically cropped to about 4” long to provide for a good hand-hold. The most critical physical characteristic of the JRT is that the chest should not be too large to preclude the dog from chasing game into a hole.

The Jack Russell has a very easy-care coat, regardless of coat variety, requiring nothing more than regular brushing. He is consistent, year-round shedder.

The Jack Russell Terrier is a enjoyable companion when he has been properly exercised; however if he doesn’t get enough exercise, he may well become a nuisance. He needs to be taken on a long, daily, brisk walk. Additionally, he will be magnificent with space to hunt, run and play.

The JRT is a long-lived breed that has managed to avoid most health problems because of a wide and strong gene pool which creates no need for excessive line breeding or inbreeding. That being said, their recent popularity increase has caused some lines to have some genetic health issues crop up. Those issues include:

A test can be performed on puppies that are over the age of five (5) weeks to check for congenital deafness: the BAER (“Brainstem Auditory Evoked Response”) test. Check with your breeder to determine if your potential puppy has had this test performed.

Behavior / temperament:
This playful, energetic breed makes an exceptional companion for an equally playful, energetic family. The JRT is a lively, happy, loyal, and loving dog; he is brave to the point of absolute fearlessness. He is amusing, enjoys games and toys and is so very intelligent that if you let him take an inch, he will easily become willful and single-minded in his quest to take the entire mile. It is vital that you are his pack leader. If you are not smarter than he is, he will take over. He must to be given rules and limitations as to what he is and is not allowed to do, else he fall into “Small Dog Syndrome,” and develop the belief that he is pack leader to all humans. Allowing him to fall into “Small Dog Syndrome” will bring on a myriad of degrees of behavior problems which can include separation anxiety, obsessive parking, guarding, and even snappishness. Be vigilant in not allowing him off the lead unless they are very well-trained as he loves to chase and will chase anything that moves with a single-mindedness that excludes him paying any attention to his own safety.

The JRT has a significant tendency to become destructive, including digging, if not kept occupied and exercised. Be aware that JRT’s are very adept at climbing and jumping! He can climb over nearly any fence if bored or believes he has a good reason to climb over, and he can easily jump over five feet high. With an alpha and understanding pack leader, the JRT can really excel; however, if you do not understand what it truly means to be a ‘pack leader,’ the JRT is not recommended for you. While they have multiple wonderful characteristics, the JRT is not a good breed choice for the inexperienced dog owner.

The JRT is rated high in learning rate, high in problem solving and low in obedience. They are very trainable with a firm trainer with experience in handling a willful-minded dog. Without a trainer who can show authority, the JRT can be very difficult to train.
Jack Russells like to bark.

Faithful family dog, not so friendly to strangers
Wilson wasn't the first dog we'd had; our black labrador had passed away a few years prior, and the two dogs couldn't be more different. Wilson barks at strangers, HATES swimming, and can be very nervous. But he's also incredibly affectionate towards his family, full of personality, and loves exploring in the garden. Jack Russells as a rule seem quite yappy, and aren't the most easy going dogs. Wilson has however always been of robust health, and even now at 12 he's full of energy and enthusiasm. He's a great dog, but if you're after a placid breed, Jack Russells probably aren't it!.

From S Dean - Trainer and Former Vet Tech 1356 days ago

As a professional trainer, I used positive reinforcement in all of my private and group classes for basic obedience. It's very effective and doesn't risk damaging your dog or his trust, as punishment sometimes does. Highly reccomended!.

Adopt a Jack Russell Terrier from a shelter near you 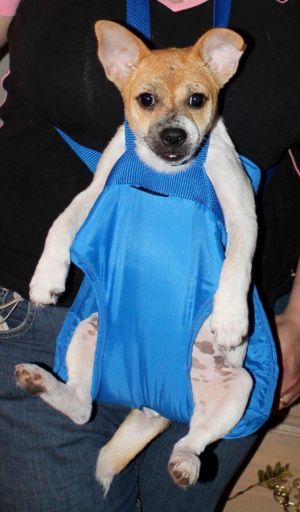