Is the Dalmatian right for you?

The basics:
The Dalmatian is a large, striking dog that has undergone a few booms and busts in popularity over the years. The 1961 Disney film 101 Dalmatians and its 1996 remake, as well as the 2000 sequel 102 Dalmatians, sparked a boom in breeding these dogs for quick profit, often from lines with known health or temperament problems. The result was a meteoric rise in the numbers of abandoned Dalmatians. The breed then tanked in popularity, falling to the 64th most popular breed registered by the AKC in 2015.

A healthy, well-bred Dalmatian can be a joy in the hands of competent owners who enjoy working and playing with a large, energetic dog. They're not afraid to work. In the Middle Ages, Dalmatians were probably hunting hounds. By the eighteenth century, they were pulling carriages. Eventually, they became famous as firehouse dogs that escorted the horses pulling fireman's carts, and even today they seem to get along well with horses, as well as other family pets.

However, they are not for everybody. The younger dogs must be trained not to jump up, and they could intimidate a fragile or unconfident owner. In addition, many dogs are deaf or hearing-impaired and may represent a challenge to the average owner.

Appearance / health:
The Dalmatian is a heavily spotted, white, medium-sized, well-proportioned, muscular, and elegant dog. Its body boasts a symmetrical outline with a proportionate head and moderately long and pointed muzzle. The eyes are medium-sized and slightly round bearing an intelligent expression.

The ears are triangular, set high and bend down from its base. The neck is quite long and gracefully arched. The legs are straight, sturdy and muscular. The tail of the breed is moderately long and uniformly thick; carried in a slight upward curve but never completely over the back.

The Dalmatian sheds heavily twice a year. The breed requires regular brushing to keep the coat clean and healthy. Bathing is usually done only when required.

Dalmatians require moderate amounts of exercise every day. A fenced yard provides an opportunity to run freely. Play sessions with the owner and daily walks provide the necessary exercise to keep a Dalmatian active.

The Dalmatian is often prone to problems of urinary stones, and skin allergies. The breed may also suffer from urinary tract problems occasionally. Around 10-12% of the breed is believed to suffer from deafness. The Brain Auditory Evoked Response (BAER) test conducted on young pups is a good way to determine whether the pup is deaf or not.

Behavior / temperament:
The Dalmatian tends to get bored quickly and likes to keep itself busy in some activity or the other. Digging and barking is seen in bored dogs. It has a very sharp memory. The breed constantly craves for human companionship, without which it may become depressed or destructive. Some Dalmatians display a behavior that is termed by some as "smiling" in which, it draws back its lips in a snarl, without growling, to indicate submission. This is particularly unique to the breed. Dalmatians should not be left off leash in a public area, as they tend to wander.

The Dalmatian responds well to positive reinforcement training (rewarding the dog for things done right and ignoring things not done right). Firm and consistent training goes well with the breed.

Normally, the Dalmatian is not very noisy. However, if it does not get enough exercise, or is left idle for too long, it could indulge in problem barking and destructive activities like chewing.

Dalmatian
We got Pongo when I was just 4 years old, right when we moved to Texas, my brother & sister were just babies. He was great to grow up with, and great with our little friends who would come over. When we first got him, we were living in town. Later, when we moved to the country on some acreage, he was a great guard/watch dog. Anytime there were snakes or anything out of the ordinary, he would bark & bark & bark wherever the 'predator' was. My dad really appreciated the help, haha! He was very playful, and always a great companion. He rarely ran off when we moved to the country, if he did, it was no more than a couple hundred feet from the house, watching the cows, etc.

He was always 'smiling', if you've ever owned/been around a Dalmatian, you know what I'm referring to. He was a great buddy for my dad, and a great 'sibling' to myself, and my brother & sister.

I would recommend a dalmatian to really anyone, they're great companions..

From S Dean - Trainer and Former Vet Tech 1309 days ago

Adopt a Dalmatian from a shelter near you 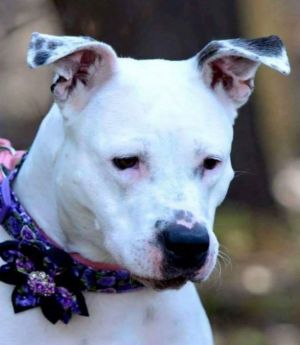