Is the Bull Terrier right for you?

The basics:
The Bull Terrier, often seen with a pirate's patch of color over one eye, is a breed that projects an aura of energy, playfulness, and even mischief. Originally developed for courage and agility in the dog-fighting pit, they have given their genes to other popular terrier breeds, including the Argentine Dogo,

Like its close relatives, the American Staffordshire Terrier and the American Pit Bull Terrier, the somewhat rambunctious Bull Terrier needs to be carefully socialized so that they don't represent a risk to young children or even fragile adults. They can be quite bouncy and could knock somebody over, even if only to lick their face. This is a breed for an experienced and attentive dog owner who knows how to manage a powerful and energetic dog.

Appearance / health:
The Bull Terrier is a dog with a characteristic egg-shaped head that is almost flat on the top, with a muzzle tapering slightly down to the tip of the nose with no stop. The almond-shaped eyes are small, dark, and well sunken. The nose is black. The muscular body is round and full. The tail is short and set on low. Presently, Bull Terriers come in two varieties that include the all white ones and the colored ones, and are milder than their fighting ancestors were.

They are average shedders and shed twice a year. Occasional combing and brushing is done to remove any dead hair. A wet towel can be used to clean the coat.

They require moderate amounts of exercise every day. A walk or a jog is important to keep them healthy and happy.

Deafness is common in Bull Terriers. Many dogs also suffer from skin allergies caused by flea and insect bites or food. Bloat may occur in some dogs. A few are prone to zinc deficiency that can cause death.

Behavior / temperament:
Extremely mischievous and clownish, Bull Terriers make great companion dogs. They can be destructive at times either by chewing or biting objects in the house. Always eager to please, they cannot live without their owners. They rarely fail to wag their tails or slobber their owner with kisses when they see them. They do not make the best of guard dogs, as they are too independent-minded and friendly with people most of the times. Bull Terriers demonstrate their terrier personality from time to time by digging up the yard or chasing smaller animals. Sometimes, they may willfully disobey their masters to follow their own instincts.

Bull Terriers have an average learning rate. Training may be difficult owing to their independent natures and may require the help of a professional trainer in some cases. It should be firm, consistent, and keep them engaged. Early socialization and obedience training is extremely important with this breed.

They are not very noisy. Most Bull Terriers bark with a reason. Many Bull Terriers make a series of grunts and other sounds that almost sound as if they can talk.

A silly dog.
Everybody loves Olivia and Olivia loves whoever gets near her (except for cats, or small animals).
She is the most foolish dog I ever met, she loves to play and stay around people all the time, you can't help yourself but just fall in love with such a tender spirit, you can almost do anything to her and she will always be happy, just for the fact that you're with her.
I was afraid to introduce her to the smallest members of our family because of her exuberant character but she showed more self control than anyone could imagine.
Her playfulness sometimes is "too much", it doesn't annoy me personally, but I understand that someone could easily be overwhelmed by her. Sometimes she can get easily frustrated by the fact that she stays home for too long or nobody is around to play with her so she'll do some mess around the house like eating up the remote control or some shoes, but I can't find the strength to blame her, I know that she can get out of control and emotional from time to time so I can forgive her mischief's.

The real thing that hurts me about this wonderful dog is her health. She always had troubles, from thyroid and hormonal problems to dermatitis and stomach problems, we had to get used to buy special foods and even sunscreen for her sensitive skin, we always have to pay attention to what she eats and in the summer we can't go around as much as we'd wish because of her skin problems.
I am aware of the fact that every breed has their problems but I didn't expect so many from the same dog..

From S Dean - Trainer and Former Vet Tech 1259 days ago

Committing to set your dog up for success
Helping your dog to avoid fearful stimuli is simple in theory but can be difficult in practice. How many times has a dog owner with a dog who has a fear of something thought, "just this once, she'll be fine" or "it's only for a minute, I don't have time to avoid this right now"?

Owners must understand that if a dog is fearful of something, that is a real emotion for the animal. The owner might understand that fireworks are harmless or that a small toddler is innocent but for a dog who is afraid, they are simply afraid.

Unfortunately, many owners do not take their animals fear seriously until a bite occurs. A dog with wide eyes, who freezes in place, begins to lick their nose, yawns, or lowers their tail/posture are all signs of fear or emotional discomfort that can go unrecognized.

If a toddler or child approaches a dog who begins to lick their nose, avoid eye contact or freeze in place while slowly wagging their tail low they are not ok with being approached by the child. Some days they may be able to handle this if the dog has been mostly free of fear or stress. Somedays the dog may have had too many triggers. (Think of how you feel some days when you didn't get enough sleep, or a mishap occurred at work. When you get home, you may be more likely to snap at your family or have less patience.) The dog doesn't have the ability to remove themselves from the situation- the owner is responsible for that.

Thus, as owners we must respect what our dog is fearful of and do our best to seek out knowledgeable professional help in the way of a behavioral vet or trainer who works with one. Ideally, the dog can overcome the fearful stimuli but in cases where progress is only beginning or the fear is too entrenched it is best to avoid the situations which will cause the dog fear. Dogs always want to please people but it is important to know that they have their own emotions and limitations to how they can react in life.

It is our obligation to return the adoration of our dogs and protect them from fearful stimuli while also working to overcome frightening situations. .

From LakeLife 1276 days ago

Adopt a Bull Terrier from a shelter near you 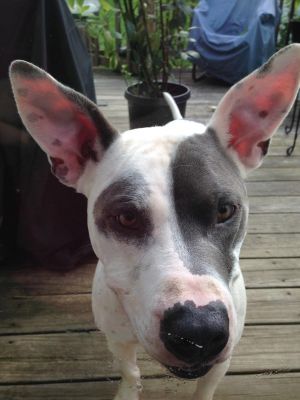