Is the Boxer right for you?

The basics:
The Boxer is a highly regarded family pet and a loyal watchdog. Originally developed as a working dog that apparently did everything from pulling carts to police work, this breed is strong, energetic, and intelligent. Some individuals can be stubborn unless you know how to be a leader, so bring your best dog training skills to the relationship. It's worth it. Even today, these intelligent dogs can work as watchdogs, military or police dogs, and search and rescue, as well as providing energetic, fun-loving companions.

These very short-faced dogs sometimes face significant health challenges. They also do poorly in very hot or very cold climates. You'll want to find out all you can about your potential Boxer's background.

The name "Boxer" describes the dog’s habit of fighting with its front paws, as well as using its feet to paw at toys, its water and food bowls, and even at you in a "catlike" manner. There are two types currently being bred-- the German Boxer and the American Boxer. The German Boxer has a bigger head and is more muscular.

Appearance / health:
The Boxer's build is compact and powerful, well-muscled, and should have a sturdy, strong, squarely built appearance. In the U.S., the tail is typically docked and the ears cropped, while both docking and cropping is now illegal in some countries. Their ears, left in the natural state, are dropped. The head should be in proportion to its body, lean and unwrinkled except for the forehead. The teeth should meet and have an undershot bite; the lower jaw extends beyond the upper jaw and curves upward. Boxers have a broad, blunt muzzle, dark eyes, a black nose, and should have an expression of alertness.

Brush your Boxer with a firm bristly brush. Do not bathe unless absolutely necessary as it removes the natural oils from their skin. The Boxer is one of the few dog breeds that groom themselves in a cat-like fashion and are very clean. The Boxer is an average shedder.

Because they retain their puppy-like behavior well into their senior years, it is the nature of the Boxer to love to play, so have an ample backyard or, if you’re an apartment dweller, taking him for long walks each day is beneficial and allows him to burn off some of that puppy energy.

Food allergies are common in Boxers; it is recommended that you avoid foods that contain corn in any form, wheat, brewers yeast, and all forms of by-products. Typical indications of food allergies are itchy and/or red skin, ears and/or feet, persistent ear infections, diarrhea, vomiting, or hives.

Additionally, though they are a generally healthy breed, Boxers can be prone to a number of other health issues/conditions, including:

NOTE: White Boxers can be prone to deafness.

Behavior / temperament:
The Boxer is a fun-loving but protective breed. They are a confident dog, both self-assured as well as self-confident, and can be fearless. Many maintain a puppy-ish demeanor throughout their life, playing, clowning around, and being generally active.

A Boxer's temperament is as much a matter of training as it is of genetics. You should expect your Boxer to be alert but gentle, loyal and obedient. While they are usually a rather easy-going breed, some can be stranger-aggressive and potentially overly protective of their family. Boxers can be stubborn but they remain a sensitive breed and respond well to training. It is vital for the Boxer to have a lot of human companionship.

The Boxer needs a dominant owner. Training should begin early, be consistent, and be firm; training should not, however, be harsh due to their sensitivity. Because they love to jump, teaching your Boxer not to jump up or on people is very important and should be part of the early training process. Their learning rate is fast because they are alert, they are attentive to their owners, and they want to please you. Because you will be dealing with a dog with very high energy levels and a very high intelligence level, you will need to be willing to spend the extra time required to exercise patience in training, but it will be time well spent with years of dividends.

Generally the Boxer is a quiet dog that does not bark except to alert. They are exuberant in their play and can become noisy inside the home during play.

Great Family Dog
Boxer's are sweethearts. They love being with their families, playing, and food. They are pretty trainable. Some might tend towards stubbornness, but there high energy and food drive should keep them engaged with their handler. Our boxer suffered from hypothyroidism which caused him to be a little prone to gaining weight, and he was lazy. Most boxers are higher energy than ours. I will say that ours loved the trampoline, and I have never met a boxer that could not out jump me. Be aware of their ability to jump high. I know boxers that have escaped very high fences. Boxers are another brachycephalic breed meaning that care should be given in high and low temperatures, and respiratory problems might be an issue no matter how well bred the dog is. Boxers are incredibly gentle but will bark if they see something unusual. They look frightening to a burglar but if socialized appropriately will not be a risk to actual house guests. Boxers are great family dogs and forgiving with first time dog owners. Just be prepared to handle his energy and possible health issues..

From S Dean - Trainer and Former Vet Tech 406 days ago

To teach a dog to eliminate on command, it's as simple as clicking when they begin to squat and rewarding them (calmly and quietly; dogs don't really like to be startled in the middle of doing that). When you get to where you can tell they are about to squat, you add the cue by saying "Potty" or "Bathroom" or whatever word you want to use right before they squat, then clicking and rewarding when they do it.

To teach a dog to alert you to his needs, you can hang a bell on the door. Click whenever he touches it and let him outside (in this case, the reward is opening the door).

Clicker training is great for so many things, including house training!.

Adopt a Boxer from a shelter near you 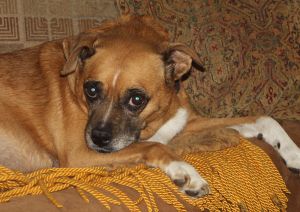 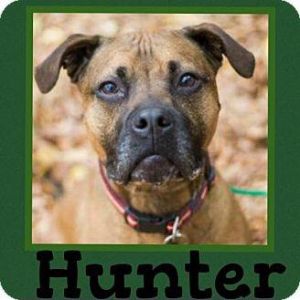 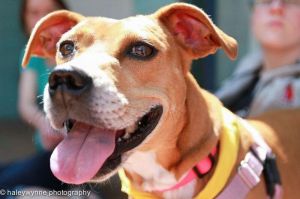