Is the Australian Shepherd right for you?

The basics:
The exuberant, outgoing Australian Shepherd is one of the most beautiful dogs. Like all herding dogs, it was developed for its high intelligence, its alertness, and its eagerness to work-- traits that make for a wonderful pet for active families. The combination of beauty and brains means that these dogs can be one of the most attractive choices around, especially for active owners who are willing to provide plenty of training and mental as well as physical exercise.

This breed won't find contentment as a powder puff sitting on a cushion. You need to be able to channel that energy into jogging, playing ball or frisbee, or other outdoor activities. Some owners report that a bored Australian Shepherd could dominate or chase other family pets.

Breeders in the United States are currently focused on developed a smaller version of this breed called the Miniature American Shepherd.

Appearance / health:
The Aussie is a well-balanced, vigorous, country-style dog, standing squarely on all four legs, having a body somewhat longer than her height at her withers, and possessed of a deep chest. Her slightly tapering muzzle is about the same length as the top of her head; ears are triangular-shaped with a slight rounding at the tip and are at the side of her head, set high; eyes are oval-shaped, medium-sized and come in a myriad of colors, including brown, amber, blue or any combination/variation thereof including flecks and marbling; the stop is moderate; the bite is scissored. If she is not born with a naturally bobbed tail, as is typical, her tail is customarily docked to not exceed four inches in length. She has a weather-resistant, straight to somewhat wavy coat of medium length and texture with an undercoat; her hair is smooth on all areas except where feathered on the back of her forelegs, as breeches under her tail, and in her moderate frill and mane (though the frill and mane are more apparent in males). Gender is clearly defined in the features of the individual dog.

Because the Aussie is both an average shedder and, seasonally, a heavy shedder, regular brushing is recommended to control shedding. Bathing is recommended only as needed in order to avoid removing naturally occurring oils from the dog’s skin. Do take the time to carefully remove sticks and burs from the coat regularly.

Not only does this breed need significant, vigorous daily exercise, but she should be given a job to do within the family. Adding the teaching of challenging tricks to her regimen will keep her mentally stimulated and aide in her overall good mental health. Take her on a jog or let her run beside you as you bicycle; get the kids out in the yard to throw the Frisbee or a ball for her – the more you exercise her body and challenge her intelligence, the happier, healthier and well-adjusted she will be!

Though it is unfortunate, the Australian Shepherd is beset with many congenital health issues, including:

Behavior / temperament:
Australian Shepherds can easily be said to be the "perpetual puppy;" they never stop loving to play. They are an amicable, loyal, courageous and loving companion with a natural tendency to please that extends to anticipating what their owner wants before it is asked of them and makes them highly trainable. They are instinctively protective, but tend toward wariness with strangers rather than aggressiveness when properly trained. Because of this natural suspicion of outsiders, early and frequent socialization is a very necessary part of their puppyhood (and continuing) training. An isolated and bored Aussie is likely to become destructive and anxiety-ridden, so make sure your Aussie is an indoor dog that spends most of his time with the family and gets plenty of exercise or, even better, given a job to do. Keep in mind, when searching for your companion Aussie, that some lines have been bred with a strong focus on working (herding); Aussies from these lines truly need work, and may be best left to an appropriate working home where their herding drive can be used on livestock. Aussies bred for the show ring are often a better choice for a companion position, and are often referred to as "softer" dogs for their less ambitious outlook on life. But even they need socialization and structure, to avoid misunderstandings. The optimum family situation for the Aussie would be an active family residing in a suburban or rural setting.

The Australian Shepherd is rated high in learning rate, obedience and problem solving. The Aussie is easy to train because he enjoys it and, as a result, he learns very quickly. Early and frequent socialization to people and other animals is best began in puppyhood and continued throughout his lifetime.

Australian Shepherds only bark when necessary, having been developed to herd with swift, responsive, and quiet maneuvering rather than utilization of vocal ability.

My "Unicorn" Aussie - One of the Best Breeds - My Bestfriend
Since Aussies are a herding breed, they are typically regarded as intelligent, high energy, and very active. Which is typically true, however my boy Bandit didn't read the Australian Shepherd handbook. He is still extremely intelligent and easily trained because of his food motivation, however he has never been high energy and loves being a cuddling couch potato. He doesn't care to go on runs, he'd rather sit around and eat 20 times a day! Although his brain still needs to be kept busy with training sessions and interactive dog toys, etc. Not all Australian Shepherds are wild and super high energy, it truly depends on the dog! Overall they are my favorite breed for many reasons..

From S Dean - Trainer and Former Vet Tech 404 days ago

Worked relatively well
It is effective but requires a lot of patience and coordination. It was relatively effective with my stubborn and energetic Australian Shepherd. After sticking with it for a while, she learned what she needed to do. It is really important to provide a verbal queue, such as "heel" together with the clicker. Rewarding good behavior is another important point; so I carried with me plenty of little treats during our walks..

From Sureyya 368 days ago

Adopt a Australian Shepherd from a shelter near you 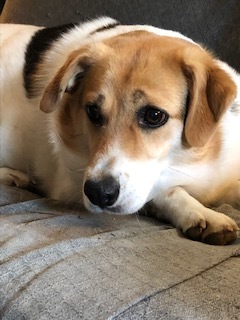