Is the American Staffordshire Terrier right for you?

Other name(s): Am Staff; Amstaff; AmStaff

The basics:
The American Staffordshire Terrier is a heavier version of the original English Staffordshire Bull Terrier, already a powerful dog developed to bait bulls and bears or to fight in a pit. An intimidating dog with a powerful bite had its place in the settling of the United States, where there was large game to be hunted and isolated homesteads in need of protection. However, in the present century, there is no denying the fact that irresponsible owners are misusing the dogs for fighting or to guard illegal drug operations -- leading to a backlash against the breed and those who own them.

Before you obtain an Amstaff, you should be sure that you have the right experience to train and manage a dog this powerful. You should also check your local laws, as well as calling your insurance agent. In some areas, these dogs have been banned, and many insurers will cancel your homeowner's or your liability insurance if you are found to own this breed.

The Am Staff is often confused with the similar, but taller and less stocky American Pit Bull Terrier. Alas, the first sentence out of many people's mouths after a fatal dog attack is something like, "That wasn't a pit bull, it was an American Staffordshire." True or not, these dogs have had terrible publicity, and you may find yourself quite unpopular with your neighbors if you decide to purchase one.

American Staffordshire Terriers are average shedders. They are brushed daily with a firm bristle brush. These dogs require minimal grooming. Bathing and shampooing is done occasionally and only when necessary. Wiping them with a damp cloth will help their coats become shiny.

They require moderate amounts of exercise daily to keep fit and happy. A long walk or jogging with a leash may help them expend their energy.

American Staffordshire Terriers are prone to congenital heart disease. Hip dysplasia (a condition in which the hip is not formed properly and eventually may cause lameness) and eye problems may also occur in some dogs.

Behavior / temperament:
The American Staffordshire Terrier is a courageous, tenacious dog with oodles of strength and loyalty. They can be fiercely protective of their owners and are generally not aggressive toward people. Owing to their fighting lineage, they have earned a bad reputation as extremely aggressive dogs and are not permitted in certain areas. Despite the bad press, with proper training and socialization, these dogs emerge as lovable, fun-loving, and affectionate dogs, endearing themselves to people around them.

They are quick learners but require specialized training that takes into account their strong, aggressive nature. Training begins early when they are puppies. The trainer has to keep in mind their aggressive nature.

They are not noisy dogs most of the time. They bark to get the owner's attention.

Buddy, my American Staforshire Terrier
Buddy is my 5 year old American Stafordshire Terrier. Best dog I've ever owned and I've owned 6 so far in my life. I am a Combat Veteran with Post Traumatic Stress Disorder (PTSD), and he serves as my companion dog who helps me manage my anxiety and PTSD flare ups. So far I have trained him myself, but I plan on making him into a full service dog in the near future. He is honestly one of the smartest dogs out there. I got him when he was about 2 months old and he was house trained by the time he was 5 months. All he wants to do is please me as his owner, which makes it a breeze to teach him commands and tricks. He knows over 15 tricks so far and still learning more. He is a very energetic dog who needs his regular exercise daily, so I take him and my other dog to the small park in my neighborhood every morning to get their exercise in. He loves to play fetch and he's great around other dogs. He's good with most other animals as well, to include cats, even when nipped or barked at. Nicest dog in the world if you just raise them right. Wouldn't trade him for the world..

From S Dean - Trainer and Former Vet Tech 1308 days ago

Adopt a American Staffordshire Terrier from a shelter near you 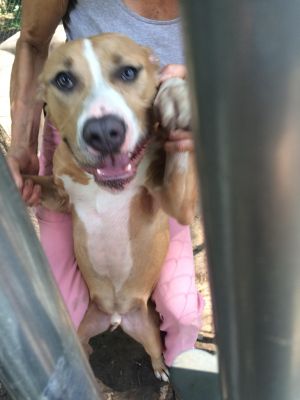