Is the American Foxhound right for you?

The basics:
The American Foxhound was developed by the early settlers to the New World from hounds imported from England and France. Lighter, more agile, and taller than the English hounds, they are celebrated for their ability to pursue fox and other small game thanks to their stamina and keen sense of smell. Used to hunt in packs of 15 to 20 dogs, they needed to be easy-going and even-tempered as well as independent and determined. Despite the great personality, they are still mostly bred for either hunting or competition, since they usually do prefer to live in a pack environment.

A fun historical note: First US President George Washington is one of the breeders who imported the original stock from England. General Lafayette, the French general who helped fight the English on the American side of the Revolutionary War, gifted Washington several French foxhounds for his breeding program.

Appearance / health:
American Foxhounds are large dogs with wide ears and a tail that looks like a raised sickle. They have a long head, slightly domed skull, and large eyes that are either hazel or brown. They have long, straight-boned legs.

American Foxhounds are average shedders and need to be combed daily with a firm bristle brush.

They need a lot of exercise without which they can be restless and destructive. Owing to their excellent stamina, these dogs can run for hours and yet remain enthusiastic about running.

American Foxhounds are free of several congenital diseases that plague other breeds of dogs. Overfeeding is a possibility, as these dogs tend to eat a lot.

Exercise is necessary to keep them fit and happy.

A health risk specific to American Foxhounds is platelet disease. Platelets are small cells necessary for the clotting of blood.

Behavior / temperament:
The American Foxhound is a gentle, affectionate dog that cannot resist pursuing an interesting scent. Their stamina and endurance levels make them good hunting dogs. They do not get tired easily and require lots of exercise to keep them fit. Most American Foxhounds are not suited for an indoor life and prefer living outdoors in packs though this is not always the case.

They can be trained easily, especially to hunt. However, they take time to housebreak. They can also be trained as a watchdog with lot of patient training. The learning rate is between slow to moderate.

They are not noisy. They bay often and bark melodiously.

Our Foxhound Champion
Champ was an excellent dog – very loving and playful, easy to train, and polite around guests and strangers. The beagle that we currently own, Ranger, reminds me a lot of our old foxhound – especially with the need for long walks and plenty of quality “sniffing time.” Champ was a lot more noisy than Ranger is, however: he had a much louder woof and was a bit more aggressive with children. Our family has very fond memories of Champ, and we recommend the breed to our friends who are thinking about getting dogs.

I would not recommend a dog like Champ to owners who are too busy to dedicate about an hour of outside walking or play to their dog each day. When we went for walks, he appreciated when they were not rushed. We would enjoy a stroll at a leisurely pace, which seemed to help keep him healthy enough to live a long and happy life. He also was excellent at playing fetch, and would often chase bunnies in our backyard. He was too much of a sweetheart, however, to actually catch or hurt a bunny.

One thing I remember about our dear Champ is that he was very afraid of thunderstorms, and other similar loud noises like construction, loud airplanes and helicopters, and fireworks. He had a habit of running into the bathroom – the most centrally located room in our home – and nestling in the bathtub until the storms (or similar noises) ceased. Recently, I’ve seen “doggie thunder jackets” being sold online that keep dogs calm during storms by wrapping them in a comfortable, weighted vest. I wish we had something like this when we had Champ – but I also wonder if he would have even let us put it on him in the first place. He had so much personality, I bet that he wouldn’t have even stood for it!.

From S Dean - Trainer and Former Vet Tech 1351 days ago

A non-drug option
Just like anything else, doesn't always work. But this is a good non-drug option to try for any form of anxiety in a dog. Safe and easy and no pills to give..

From Angela Dwyer DVM 1382 days ago

Adopt a American Foxhound from a shelter near you 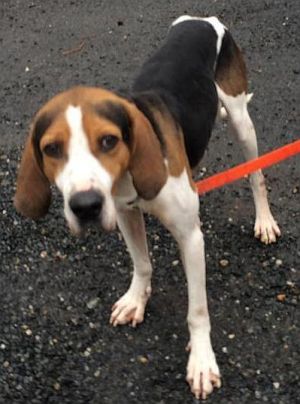