Is the Maine Coon right for you?

The basics:
The Maine Coon, a large and longhaired furball of a cat, has long been known as the “Gentle Giant” of the cat world. They are one of the largest, non-hybrid breeds of domestic cat and might even seem ferocious if not for their laid-back, easy-going, and even clownish disposition. The Maine Coon will strive to be your best buddy, paling around the house and lounging on the couch. When ranked, the Maine Coon frequently scores in the top 10 on lists of most popular cat breeds, and was adopted as the official state cat of Maine.

Though myths and legends abound, what is fairly certain is that the breed developed in the Northeastern United States, and has been present since at least colonial times. They’re physically adapted to survive a harsh winter climate with dense, water-resistant fur, longer on the rear and underside to protect them from snow. Their long, bushy tail can be curved around their face for warmth and protection from the elements, or tucked beneath them for added insulation from the cold ground. Their large feet are akin to snowshoes, heavily furred and tufted to keep their toes warm. Even so, the Maine Coon will be happiest when allowed to cuddle up next to you by a warm fire for the winter.

Appearance / health:
The Maine Coon is a large cat with males weighing an average of 13-18 lbs, and females somewhat smaller. The 2010 the Guinness World Record for longest cat was won by a Maine Coon named “Stewie”, who came in at 48.5 inches! They have a long body, a muscular build, substantial frame, and a broad chest. The legs are medium in length with large paws, which are often tufted with fur. Extra toes, or polydactylism, are not uncommon in the Maine Coon. They have a proportionally large head, a broad modified-wedge. The cheekbones are high. The eyes are quite large and slightly oval, only slightly slanted, and come shades of green and gold. In white or particolored Maine Coons, blue or even odd-eyed colors are possible. The ears are large with a wide base, and set high on the head. The ears may be pointed and often have lynx tips or other furry furnishings. The tail is long with a broad base, and very full with long, flowing fur.

The Maine Coon is a cat with a considerable, medium to longhaired coat, developed to withstand the harsh climate of the Northeastern United States. It may be shaggy, uneven in length with hair shorter on the shoulders and lengthening down the back and sides. The belly fur and britches are also full and shaggy. They may have a considerable neck ruff. The coat itself is glossy and heavy and has a natural water resistance. The Maine Coon has a slight undercoat. They can come in all possible colors and patterns.

Maine Coons are generally a long-lived and hardy breed, living on average upwards of 12.5 years. Some Maine Coons may be predisposed to a condition known as feline hypertrophic cardiomyopathy, which affects the heart. This is an inherited disorder, and not all cats positive for the gene will ever show signs of the disease. Because of their large size, Maine Coons, especially males, may be more likely to develop hip dysplasia.

Behavior / temperament:
The Maine Coon is a social and people-oriented cat, but not overly clingy or dependent. They’ll prefer to be in your company, follow you from room to room, and will enjoy investigating your activities, but they are not needy for one-on-one interaction and are content to “hang out”. They are an amicable, good-natured, and somewhat goofy companion. Their gentleness makes them trustworthy cats for a home with children, and their easy-going disposition means they get along with other pets in the home.

The Maine Coon may be slow to mature, both physically and mentally, and they often remain kittenish throughout their lives. They enjoy playing and may even be game for a little fetch, but because of their size they tend not to be overly fond of jumping and climbing. The Maine Coon isn’t overly talkative, but they do have a very small, chirping trill and a tiny meow that belies their considerable size!

The Maine Coon is more dexterous than many cat breeds, and you may find they have a fondness for opening cabinets or turning on faucets. Some like to cup food in their paw to eat, rather than eating from the dish. They have a tendency to enjoy playing with water, so don’t be surprised if you find your Maine Coon’s favorite toy floating in the water dish.

a Maaaarvelous Feline
My maine coon had a giant personality to match his size. I had gotten him when he was overweight. One of the things we tried to get him to lose weight was getting a treat ball for him. He learned to just kick the treat ball between his front legs or his front and back legs when he was laying down. We eventually got him fitted for a harness (medium dog) and would take him down the street, then make him walk home. He learned to love going on his walks. The only game he did play when he wanted to play was fetch. If you threw a toy, he would waddle over to grab it and bring back. Maine coons are known for being incredibly vocal and he was no exception. You could have full conversations with him and he would never let you have the last word. He was prone to matting so he did need consistent grooming. In the summer, he would get warm so he would go to the groomer once in the spring and then one mid summer. He loved sitting in the car (no carrier, he wore his harness) and watching the world go by. Maine coons are also very, very social cats. He was never one to hide when people came over to the house. Instead, he preferred to greet them at the door and demand attention. He was completely unphased by our dog (140#), probably because he could swat him with no issue. Maine coons, as a breed, are prone to heart disease. Manny ended up getting diabetes later in his life and ultimately passed from adenocarcinoma (stomach cancer)..

Stress was really the problem!
When my cat is stressed he refuses the litter box! I always know this because it will be when he is meeting new people or men in particular. I have found that reducing his stress levels in other ways has very much helped, such as trying to slowly introduce him to newer people for a short period of time. He also gets stressed when I am out of the house for long periods (a night or two), however, it is hard because sometimes this is something that is out of my control. I just try to keep his litter box as clean as possible to reduce aversion, and when I am out I will get people, whom he knows very well, to check in and scoop his litter for me and I find that this really imrpoves. .

Adopt a Maine Coon from a shelter near you 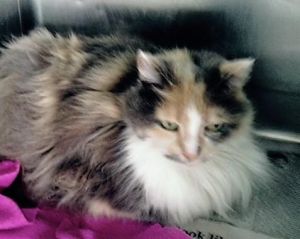 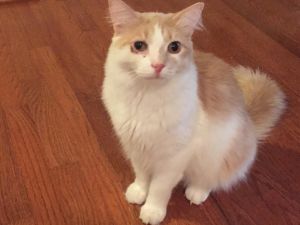