Treatment Type: Hormones
Caregiver: Do it Yourself

Pheromones are airborne chemical molecules that are secreted by insects and animals to communicate with their companions. Common pheromones include alarm and sex pheromones, and food trail pheromones.

Dog appeasing pheromone (DAP) diffusers like the Adaptil Diffuser and the ThunderEase Diffuser Kit are plugged into an electrical socket in a room that the dog spends most of its time.

A 2010 study "suggest that the use of DAP could decrease separation-induced anxiety, distress, and fear in inpatients, and possibly facilitate recovery in hospitalized dogs."

A 2015 study on the use of DAP collars in shelter environments did not found them to be effective.

A study to see if DAP collars helped Beagles who suffer from noise-induced fear, also found that "both global and active fear and anxiety scores were significantly improved during and following thunder compared with placebo."

DAP spray/diffuser/collars (a.k. a. Adaptil) has helped quite a few of my patients with phobias/anxiety issues. This is a good non-dr...

DAP spray/diffuser/collars (a.k. a. Adaptil) has helped quite a few of my patients with phobias/anxiety issues. This is a good non-dr...

DAP can help many dogs

Dog appeasing pheromones have been found to be as effective as medication in instances of separation anxiety. I have raised and fostere...

Effectiveness varies from dog to dog 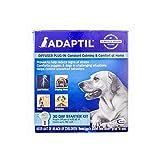 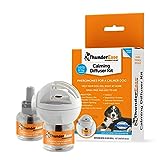